This robot control system is built around a PowerPC-based cRIO made by National Instruments (NI), custom FRC electronics, and a standard WiFi setup controlled from a standard PC netbook or laptop.
Overview

Check out FIRST Forge where FIRST community software projects, both official and unofficial, are hosted Ð start/share your own project.

There's a special Troubleshooting Page for that! 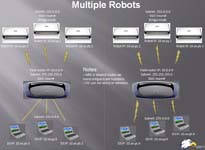 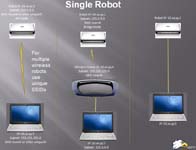 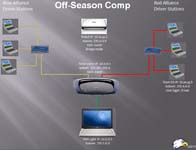 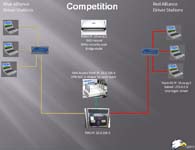 Just some background on how the competition field electronics are setup for the curious minds of people who are interested in that sort of thing. 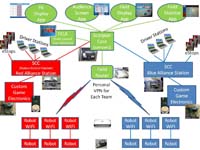 
If you have an FTA on call for your off-season competitions and you use an official field then FIRST will send you the standard Field Management System electronics, including match schedule generation, the scoring system and field control. It will use FMS Delta, a reduced feature set version of the typical FMS software.
However, if you do not have an FTA or you do not use an official FIRST playing field, then you have to put together your own field control, scoring system, etc.

You can also eliminate the Ethernet switches and go wireless from the Driver Stations to whatever you use as the field router, as long as it's capable. Lean towards Ethernet cabling/switches to avoid potential connection issues with odd-ball laptops used by teams as Driver Stations.

Components:
Scoring would be manual using people designated as scorers.
Any game special electronic scoring will have to be worked around, possibly by relaxing or modifying the rules to make it easier on the referees.
The scores and rankings would have to be tracked with a home grown spreadsheet or database system. It would also be nice to have a projection or big screen display for participants to see how they stand.

This training control system is mounted in a waterproof case for transportation. It can be used as is, inside the case for programming training or the three layers can be removed and spread out for students & mentor of the electrical system. By spreading it out, many student trainees can gather around a large table to disassemble/reassemble the components as part of a robotics class. A smaller 12v 11Ah battery is used to make it lighter for hand carrying. The whole box can also be strapped to the top of a robot drive base and used that way.
Wiring on and between boards is kept to a minimum and is not bundled in order to make it clear what-connects-to-what. In wiring lessons it all comes apart and goes back together without entanglement.

The system is mounted on a series of removable plywood layers, so each sub-sub-system can be separated and mounted on a working robot to drive around. A separate pneumatics setup on it's own boards travels separately, but works with the control system. It is spread out a little more to give students room to replumb and easily get at all the components.

The driver station travels separately but for training is only a laptop, an xbox controller and a small breakout for custom buttons & dials. It can be your competition driver station setup.

Typically, this gets used for basic control system wiring workshops, and speciality classes on just pneumatics or sensors or basic programming.